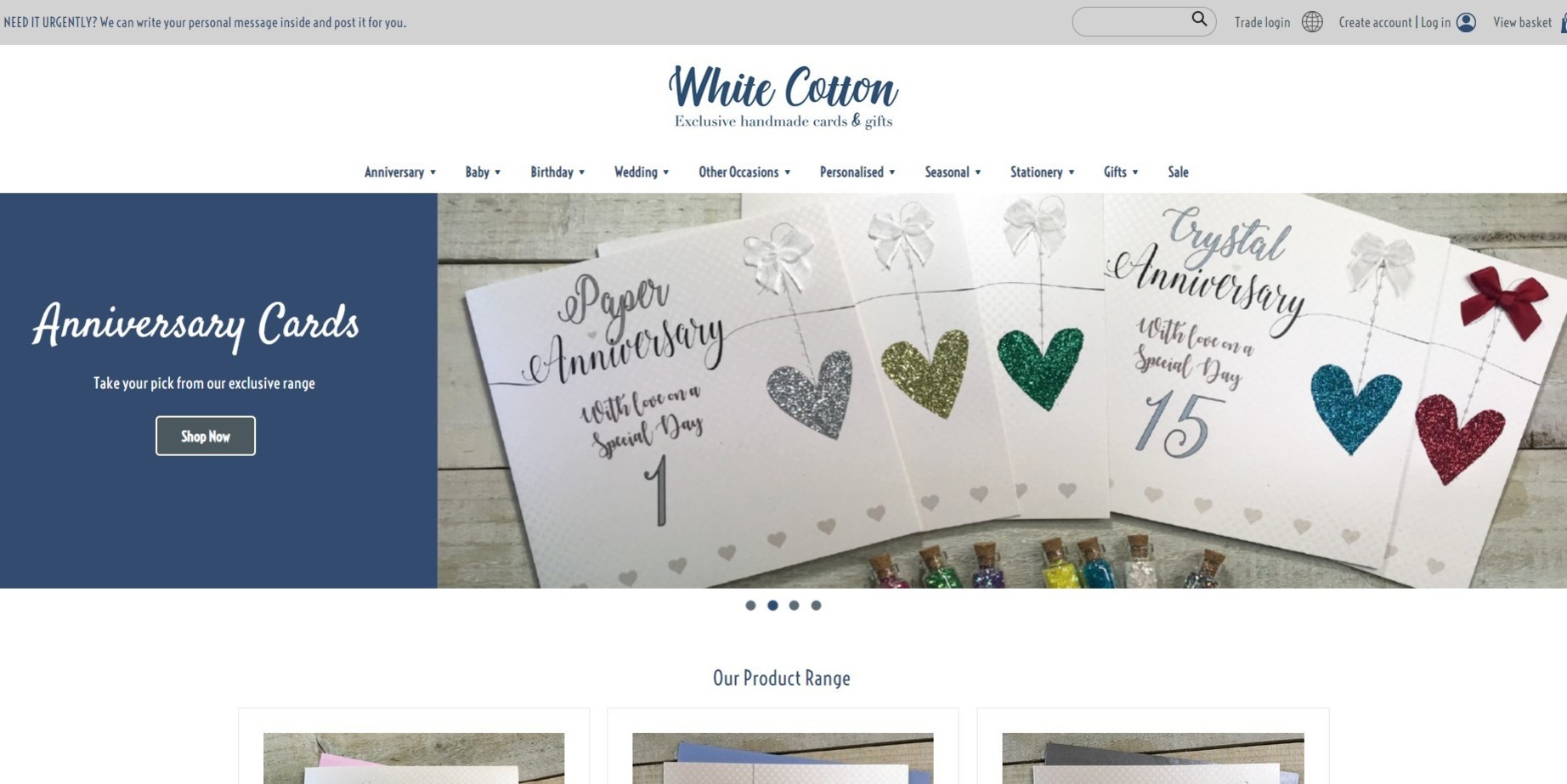 White Cotton Cards were an already established and well-respected brand that had been designing popular cards and gifts for over 21 years. Ian from It’seeze Twickenham was initially introduced to Georgie from White Cotton Cards via her husband, with whom he played golf at a Business Golf Networking Group. After a bit of gassing about golf, Tony enquired whether Ian dealt with eCommerce websites and asked for him to take a look at the White Cotton Cards website.

The main problem that the website had was speed - or lack of it. Web pages were taking a considerable time to load (around 6 – 10 seconds) and in the world of establishing and running your business online, this can be really detrimental. Many visitors won’t stick around on a slow-loading website long enough to even consider the products that are available on there. Worse still, they could turn to competitors and the slow-loading site has lost a potentially life-long customer.
There were also some general issues surrounding the look of the website. The design wasn’t as tidy as you would expect for a professional business and as such, the site showed its age. This could also be seen in the fact that a lot of modern, common features that you find elsewhere were missing.
Ian quickly set up a zoom meeting with Georgie to discuss their issues (It’seeze Twickenham are happy to meet in person however this particular incident took place over lockdown). It quickly came to light why the site was running at a slow speed because it was running as 2 different sites, 1 for retail and then 1 for trade, but both showing the same products. As such, the sites included around 6000 products and over 15,000 images, making the website work much harder than it needs to. Not only that but the images were far too big for the web again, this resulted in the whole thing running very slowly.
In terms of the site's design, the navigation system was not very effective or user friendly. This was reflected in the fact that a lot of trade customers didn’t actually use the site as a means of doing business and instead were just emailing Georgie their orders. Whilst this meant sales were still going through, the downside was that these customers won’t have been considering any of the new products that became available.
Finally, the site had also not been optimised for mobile users. A huge number of people, when doing their online shopping, will do it from a mobile and as such, when your site doesn’t allow for mobile shopping, you are missing out on even more potential sales. 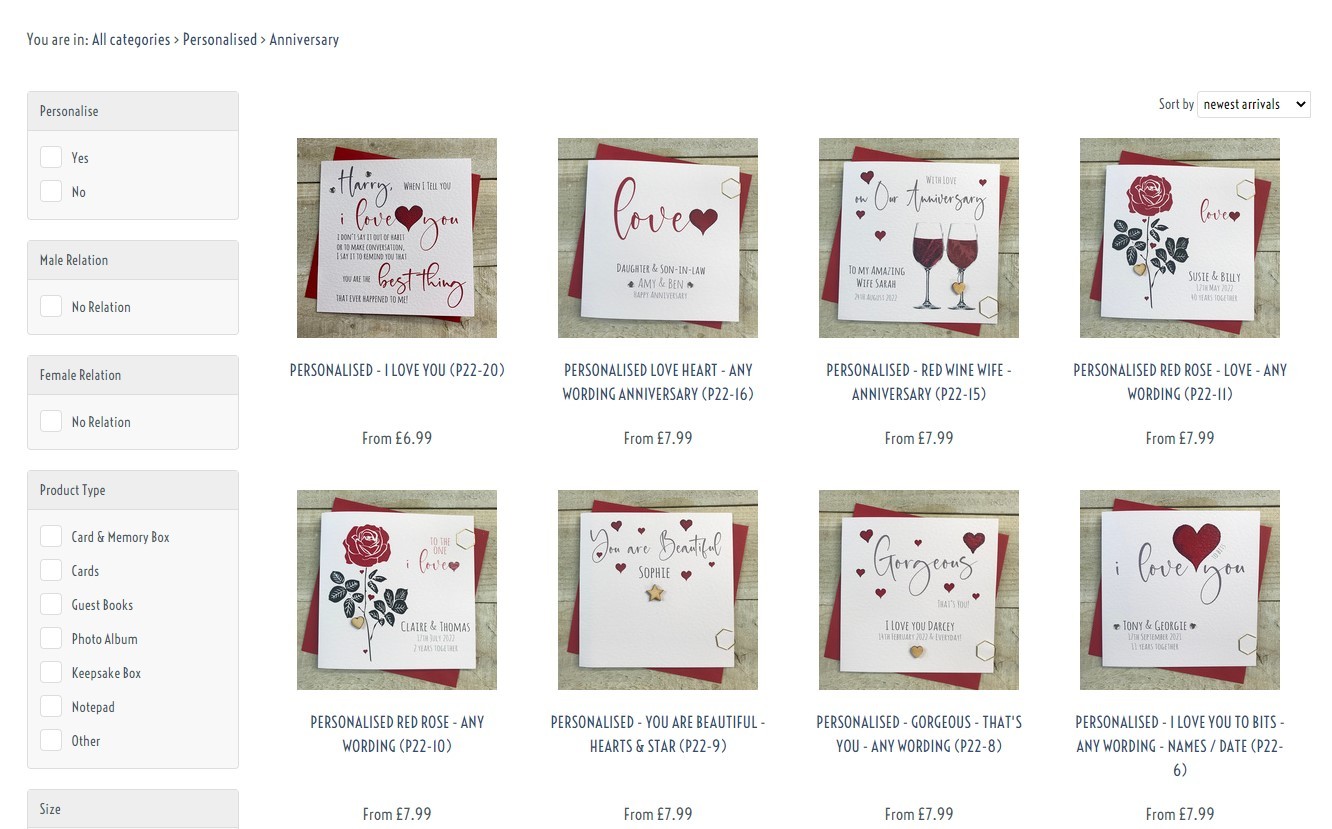 Firstly, Ian sat down with Georgie and discussed what It’seeze Twickenham would be able to do for their business.
Addressing the mobile issue, because of the fact the sites that It’seeze Twickenham make are fully responsive, they will work just as well on a mobile device than they would on a desktop. This applies to all different aspects of the site, such as the filtering system that the shop has, as well as the very easy backend management systems which is perfect for spreadsheet uploading of multiple products at one time. This was also an effective way to increase the speed of the website as the loading time could decrease massively.
White Cotton Cards took this opportunity to engage with a bit of a rebrand too, as Georgie’s husband is a graphic designer. He came up with a brand-new logo and colour pallet that are now pride of place on the new website.

The site now has a modern and professional look and loads in around 2 seconds. What’s more, the images have been resized too so that they are a lot more user friendly.
Georgie comments “Ian was fantastic, with nothing to be too much of a problem. Very helpful and super friendly. We are so very happy with our new site, and sales have soared since! Our trade customers are so keen to order online now, and have so many compliments about the site. Retail is also up on sales, and again, great comments received about ease of use, and speed.
We couldn’t be happier. Ian is also still super helpful, teaching us new tricks and improving the site.”
So with existing customers now ordering via the website, White Cotton Cards not only keep their recurring customers, but those customers are also looking at and buying the new creations added to the site.
Ian and It’seeze Twickenham provided support after the site was finished to make sure the transition to the new website was as smooth as possible.

Having a fully functioning website that looks great and is easy to use is crucial for any business that intends on having an online presence. If you are having trouble getting your website the way you want it, then you should contact professional web designers who can bring your idea to life. White Cotton Cards are just one in a range of satisfied customers that have worked with It’seeze Twickenham as we pride ourselves on the services that we offer customers.
If you would like any assistance with the design of your website or would simply like to have a chat about what It’seeze Twickenham can do for you then do not hesitate to get in touch and we would be happy to help.
Tagged as: Digital Marketing, Ecommerce, online shop, Web design, Web Designer
Share this post: